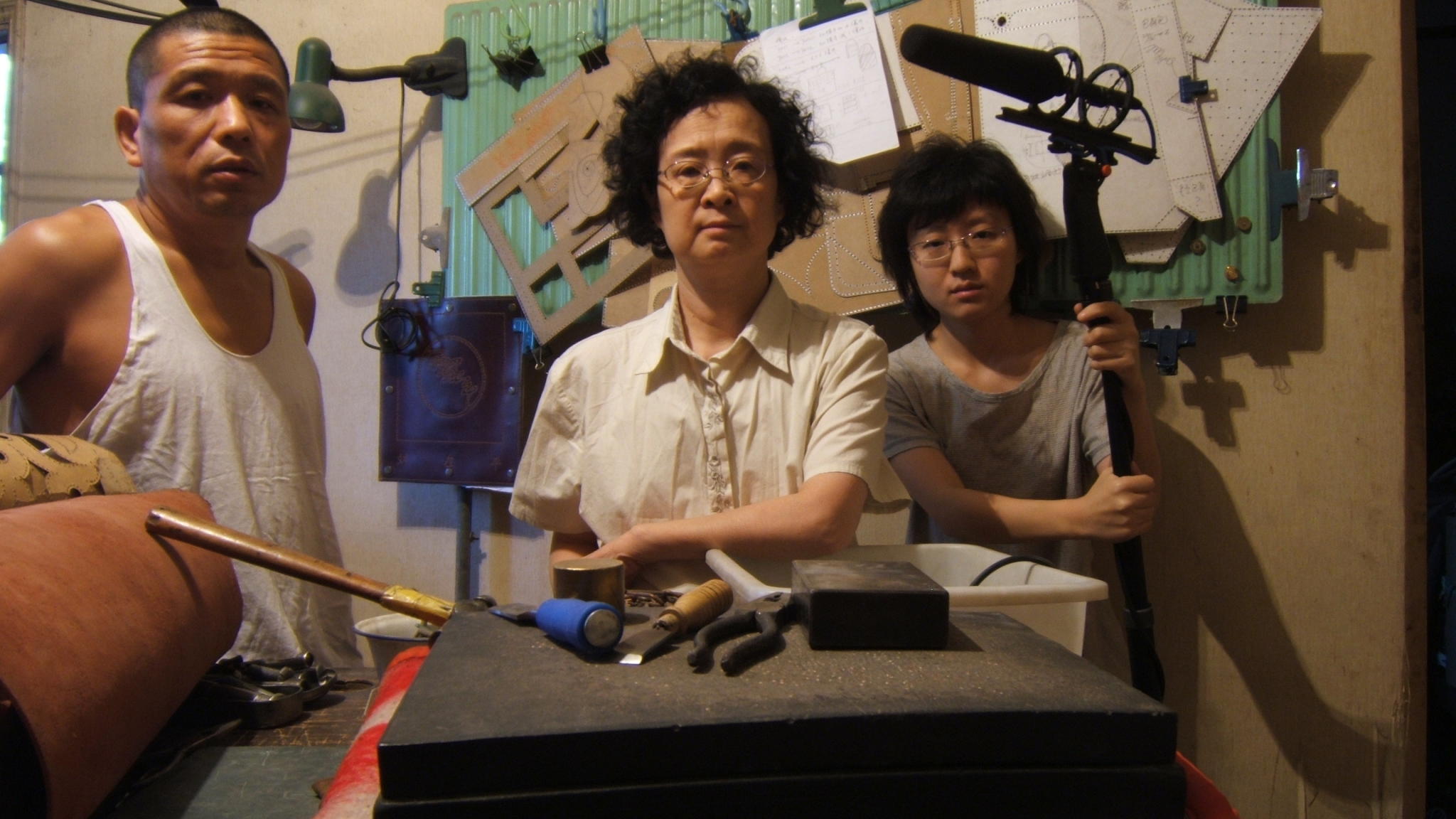 This piece was originally published on dGenerate’s website as part of a series. As a small means of solidarity with curators, critics and creators, during this extraordinary moment of crisis and confinement, dGenerate Films is opening our doors to those interested in writing and engaging with our collection.

Jiayin Liu’s Oxhide (2005) is composed of 23 static shots, inside of a small, claustrophobic apartment in Beijing, China. Within each shot are only pieces of the apartment, along with only pieces of Liu, her mother and her father. She commits to a narrative refraction of an only child in a family of bag makers with a non-fictional rigor that eschews any kind of objective context for a Western spectator. Distinctions between the film’s events and Liu’s real life cannot be accounted for. Her presentation operates with biblical fervor, awash in every frame, are individual moments that are part of a larger coherence… Lui at first leaning against a stack of clothes, a clock loudly ticking, a train that’s far too close, having dinner together, discussing the dead neighbor downstairs, arguing about the reason for their stagnated sales etc. It’s all compartmentalized with the languid reluctance to move inside an apartment that just doesn’t have a lot of room.

Liu embraces her environment by shooting in long takes (they average to nearly four minutes each) at a widescreen 2.35:1 aspect ratio, an unusually wide lens for such an intimate affair. Quentin Tarantino’s western drama, The Hateful Eight (2015), was lauded for the similar artistic decision of using an ultra-wide lense on someone’s face, in lieu of the usual exterior landscape, (it was shot at ultra panavision 2.76:1, the next widest AR) an entire decade after Lui had already contorted the technique in an arguably more fascinating capacity at the age of 23. The screen becomes ostensibly horizontal, to where just a sliver of the action is visible and it starts to feel like looking through blinds that aren’t quite opened enough one way or the other. Initially it can be frustrating to be unable to experience the film as a whole but through various stationary, point-of-view shots, a fascinating portrait of a working-class Chinese family is stitched together using much of the imagination as what is occurring on screen often oscillates in and out of frame. Cinematic aesthetics continue to converge with reality as Oxhide’s standard definition image quality, shot on a cheap Digital Betacam, further obfuscates the Liu family.

Oxhide’s restrained and modest formalism alludes to the transparent empathy of Akerman’s Jeanne Dielman, 23 Commerce Quay, 1080 Brussels (1975) with the same maximalist panache, at nearly half of the runtime. Jiayin Liu’s parents run a shop that crafts bags out of cheap materials and sells them at a cheap price. Business has not been fruitful and Liu’s father is tired of haggling with customers over price and wants to sell his goods for a fair amount. Liu’s mother reminds him that this is the nature of their business and customers need the psychology of getting a deal in order to feel comfortable buying something; “if a girl sees her dream bag in our store without a discount, she will not dream anymore,” his wife tells him. Liu’s father won’t let go of his pride, despite his daughter showcasing every reason that he must.

Watch oxhide II, the follow-up to oxhide, on ovid

At a superficial, cursory glance Winter Vacation (2010) runs the risk of presenting as a dry, milieu-laden engagement of a merry-go-round of characters, mostly children, drolly shuffling around in a typical village in Northern China. Narratively, the film loosely observes a group of Chinese youth on their last day of winter vacation, unbothered and restless. They all hang around and shuffle through the malaise of being so bored by the end of the summer, to the point of actually just wanting school to start so they have something to do. The film, nearly passively, depicts the under discussed and somewhat harrowing reality of being at an age where the agency to keep yourself engaged is something that’s out of your control until an arbitrary age is reached. A large aspect of childhood is just being bored a lot of the time, just kind of sitting around and waiting.

Hongqi Li, and cinematographer Yurui Qin, luxuriate within the frame for long stretches of time under flat, soft lighting, shrouding the cast in a perpetual, dreamy daze. Nearly everyone in the film operates with a blank faced, existential stupor except for the rosy-cheeked Zhou Zhongxin, a small boy who looks to be around the age of 5-6, with one of the meanest mugs I’ve ever seen on a child actor. The young boy serves as the film’s emotional and empathetic core, as he is the only character too young to suffer through obsessing over their own personal ennui. All Zhou Zhongxin knows are his own personal, overwhelming feelings of abject boredom, exasperated by the increasingly pseudo-contemptuous rapport he has with his grandfather. As everyone quite loftily hangs in their heads among the clouds, Zhou Zhongxin, with all of his herculean frustration, makes it a mission to run away and join an orphanage. Of course nothing of actual consequence will occur, because Zhou Zhongxin, along with everyone around him, lives in a world where going through the motions of something dramatic acts as a substitute until something actually does eventually happen.

"Without doubt the masterwork of French ethnograph

SEARCHING FOR GERDA TARO celebrates the life and work of Taro — a charismatic Jewish refugee from Germany, an anti-fascist, and a trailblazing photographer whose work would be forgotten for decades.

On SEARCHING FOR GERDA TARO - now streaming at @OVIDtv - for @vaguevisages: