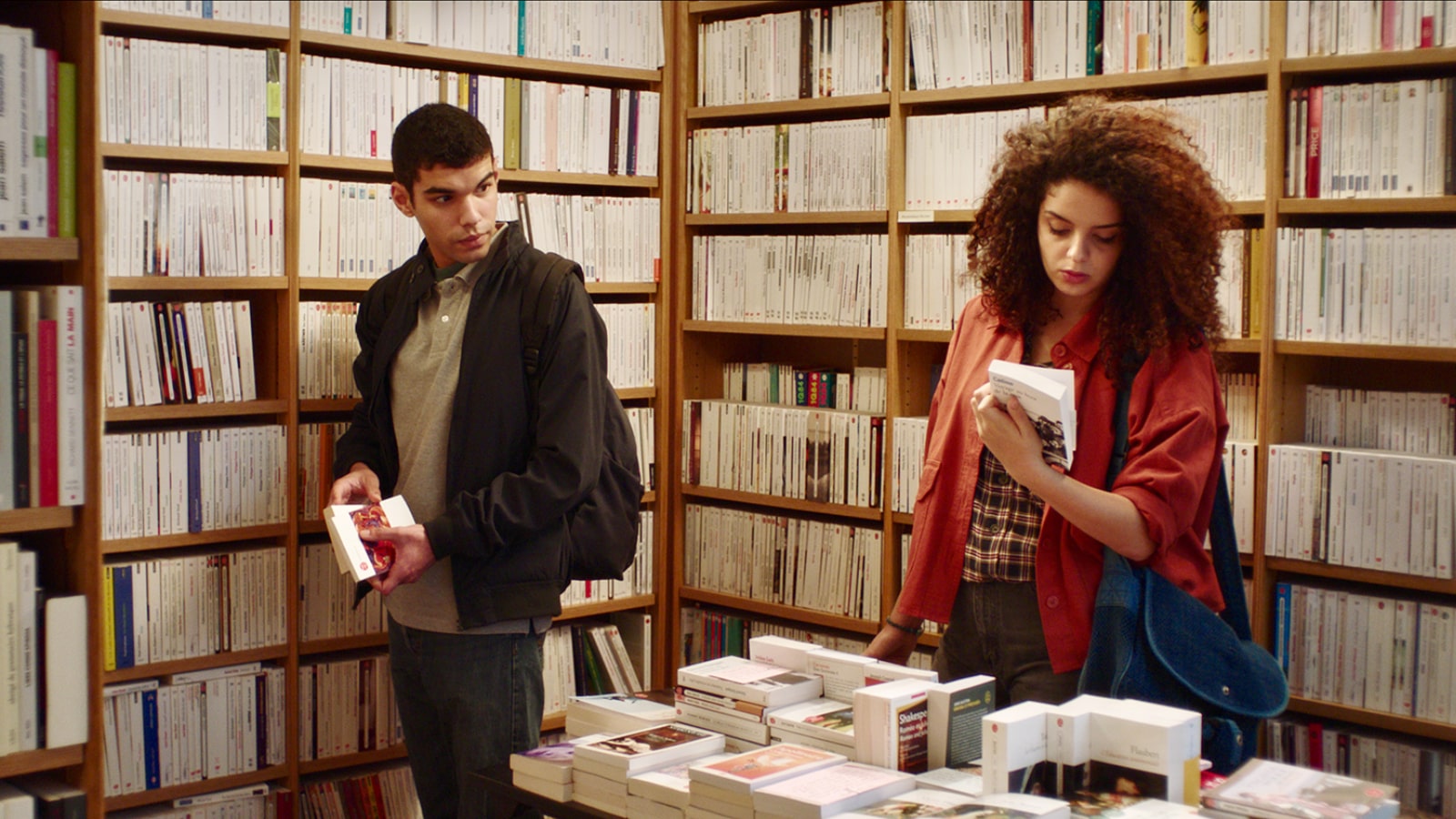 As she opens her eyes and ours: Leyla Bouzid’s “As I Open My Eyes” and “A Tale of Love and Desire”

The beginning of As I Open My Eyes (2015) informs us that the events of this Tunisian drama take place in 2010. If you know recent history, the date will be significant. At the end of that year, the region and the world was caught by surprise when massive street protests led to Tunisia’s democratic revolution, causing the departure of the country’s 23-year president and triggering what the West has called the Arab Spring.

If you don’t know these facts, this film will have a very different effect. Most of the story will resemble the kind of coming-of-age drama you might have seen before, only from the perspective of an 18-year-old Tunisian woman named Farah. She’s played by Baya Medhaffar with a combination of youthful spunk and sometimes trying egotism. In other words, she’s a normal confused youngster chafing at rules by her mom and society, from coming home late without calling to what’s considered proper or safe behavior.

While her reasonably progressive family expects Farah to attend medical school, she’s committed to musicology and sings with a band, despite the fact that many people disapprove of such behavior. If her father were some lout, he’d be a simple symbol of the patriarchy. Instead, he’s a union leader separated from the family, and he’s wholly sympathetic to Farah.

The mother, Hayet (Ghalia Benali), is a complex character who sees her own quashed rebellion in her daughter, fears for her safety, and negotiates pressures from her own mother and the conservative society around her as political turmoil rumbles at the edges. In real life, Benali is a famous Tunisian singer known for mixing genres and influences, just like Hayet’s daughter Farah. (We’ll get to see Benali perform in Bouzid’s next movie, A Tale of Love and Desire.)

The band’s leader and writer is tall, lanky Borhėne (Montassar Ayari), all T-shirt and ponytail. When Farah spends one night with him after fighting with mom, he gets a brief nude scene as he becomes the object of her curious gaze. “I’ve never seen a naked man,” she says. He answers, “I’m shy.” Then he moves on to some dyed blondie. Their relationship is the kind of thing you might see in any youthful example of handheld realism.

Periodically, Farah performs one of the band’s songs, accompanied by traditional oud (the fat guitar-like instrument) and a western drum kit, plus keyboards and effects played by Borhėne’s sister. Their fusion of traditional and modern music, with lyrics of political yearning, starts to attract a following that includes the fears and suspicions of bar owners and the police.

All this relative familiarity is the strategy of filmmaker Leyla Bouzid, whose debut feature this is. She uses the coming-of-age/teen-rebel situation, depicted clearly and compassionately in all its flawed and groping characters, to anchor a promise of what Farah and her community have no idea is arriving swiftly. Unlike us, they cannot know the future. Our knowledge casts a perspective on what we see. This is one of the classical forms of irony: we know what the characters don’t.

There’s a moment when Farah vanishes. The scene may remind us for a minute of Monica Vitti in L’Avventura or perhaps Betty Buckley in Frantic but we quickly realize the implications are more sinister, as in a Costa-Gavras film. Like many scenes, Farah’s interrogation or terrorization (“calming her”) is presented in a single lengthy shot that takes its time.

Another film might sweep us through the catharsis and triumph of the coming revolution, showing Farah participating as we assume she will, but Bouzid’s tack in presenting Farah’s chastening is to illustrate the landscape that requires change and that must leave psychic damage. Change will come because of the accumulation of such events upon thousands of individuals, and their pain will fuel what happens without quite canceling itself.

Bouzid’s second film, A Tale of Love and Desire (2021), shows the kind of freedom in storytelling that revolutions try to secure. Our heroine is another Farah (Zbeida Belhajamor), a young Tunisian in a culture whose most conservative traditions (as with those in the West) don’t necessarily approve of such people having sexual desires, much less pursuing them. Wikipedia informs us that the name “Farah” refers to happiness or joy.

Nevertheless, the film’s POV character isn’t Farah but the confused young man, Ahmed (Sami Outalbali). The opening images feature a fleshly body abstracted into square pixels by the beveled glass of a shower door, and we realize the body is a young man’s. Then we see his back, sleek and wet, unobstructed by the glass. It’s the first of several times we’ll watch Ahmed from behind, and this beginning will be book-ended with the final shot of Ahmed looking directly into the camera. After a consummation devoutly to be wished, he’s ready to face toward the world instead of retreating from it.

He’s a native Parisian whose parents are from Algeria, and he speaks French only. You may assume he’s sophisticated, liberated, assimilated, all the ated’s, but part of this film’s conceit is that he’s as reserved and tentative as anyone who’s never left a tiny village. In his working-class life, from which he’s managed to score a college scholarship, Ahmed has no interactions with anyone outside his ethnic and class circle, and he gazes with envy and confusion at modern European women. So this too counts as being Parisian, though he’s disturbed to hear that some peers call him “the Parisian.”

In choosing to focus on someone who seems in almost every way unlike herself and tell the story of his sexual and intellectual blossoming, Bouzid commits a daring act of empathy. Instead of an experienced male teaching a virginal woman, this will be the story of how the woman draws the man from his cocoon, and the magic weapon is literature because “books are life.” This story is Ahmed’s sentimental education.

Classroom scenes drop literary references on the history of Arab and Tunisian literature of love and sex, from the classical story of Majnoun-Layla to the 15th Century Arab sex manual The Perfumed Garden, to emphasize that Bouzid’s film joins a long cultural tradition, not some brainwashing by decadent Europe. On the contrary, the movie argues that these works have influenced European culture. The message: if cultural conservatives are offended, let them be educated about the deeper history of their culture. Without being graphic, Bouzid doesn’t back away from erotic content or the complex reactions to it, as vexed by cultural, political and family emotions.

A glimpse of protests on TV implies the link between personal and political liberation. Ahmed’s father reveals that, as an exiled journalist, he’s been in a funk since fleeing to France years ago and hadn’t wanted to burden his son with their history. The dislocations of tyranny and repression have an effect of cutting people off from their own cultures and history. He spends most of his time asleep, but his son and current events may awaken him as well. If the previous film has a sobering and chastening tendency, this follow-up takes a renewing, optimistic path, and being sexy is crucial to this.

We can fairly say cinema is in Bouzid’s blood, not just because this Tunisian woman studied film at the Sorbonne and had been making shorts for some time but because her father is Nouri Bouzid, who has made several films about Tunisian society. Film buffs in Region 1 have possibly seen the DVD of his debut, Man of Ashes (1986), about boys abused by their boss. We don’t wish to be simple but perhaps this explains why the daughter makes films with sympathetic fathers. Leyla Bouzid’s cinema comes from a legacy of humane, astute observation with particular attention to the lives of women and others who suffer under the powers that be.

Michael Barrett has written about film for decades, and for more than 20 years wrote a monthly video column in the San Antonio Express-News. National publications include Video Watchdog, Nostalgia Digest and a colorful piece in Retro Cinema on American No-Sex Comedies. His film scripts include one about a wallaby and a zeppelin that’s had favorable reception. To read more of his work, check him out at PopMatters.