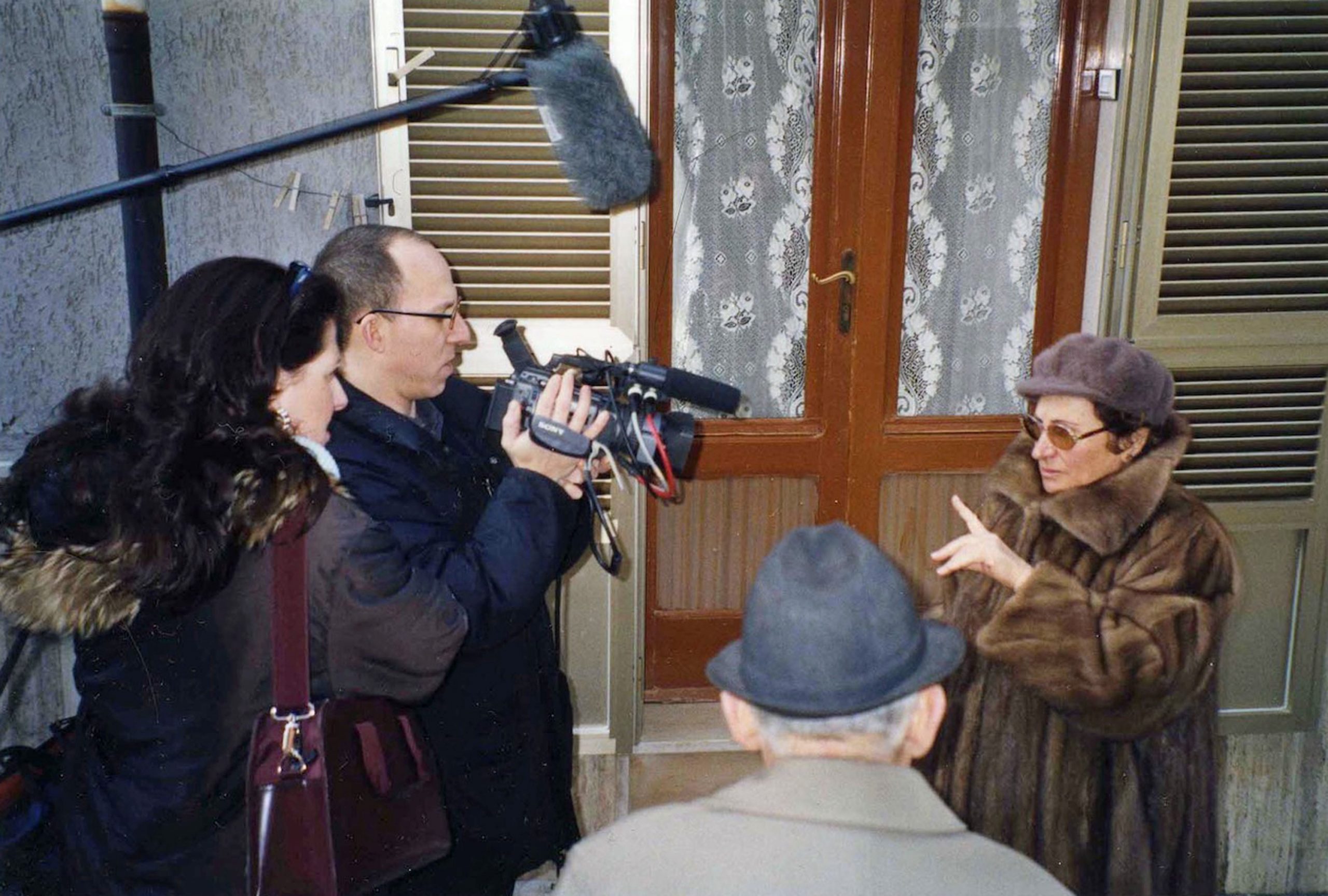 “Sacco and Vanzetti, a long time gone,” Woody Guthrie sang, “left me here to sing this song.” Woody recorded these words in 1947, twenty years after the tragic conclusion of Nicola Sacco and Bartolomeo Vanzetti’s famous legal case. Half a century later, I tried my hand at singing their song, too.

Films about history are shaped by the times in which they’re made. When I began developing a documentary about the Sacco and Vanzetti case in the early 2000s, I saw the story as a historic injustice from a long-ago era. After five years of filming and editing, the film was released to a world that was profoundly different from the one in which I had started my work. And the antique, sepia-toned story of these “two good men,” as Woody Guthrie described them, began to reveal itself in full color.

As my editor and producing partner Amy Linton and I crafted the film, the George W. Bush era began to look an awful lot like the history we were telling from the 1920s. Sacco and Vanzetti were Italian immigrant anarchists at a time when hostility toward foreigners, especially radical ones, had hit a fever pitch. The old newsreels we gathered of America’s post-WWI Red Scare looked a whole lot like the images we were seeing on the post-9/11 TV news. Intolerance and immigrant-bashing, flag-waving jingoism, and a misguided willingness to sacrifice civil liberties in the name of national security, left us with Guantanamo, the USA Patriot Act, and never-ending war. We had seen this movie before, and it didn’t end well.

Before I got started with the project, my first act of research was to watch a VHS tape of the famous docudrama that had been made about the same topic thirty years earlier. I was captivated by Giuliano Montaldo’s SACCO & VANZETTI (1971) — its nervous energy, the glorious theme music that improbably united Joan Baez and Ennio Morricone, and the compelling portrayals of its two central characters.

But what jumped out at me most was how much Montaldo’s film felt like a commentary about Italy in the early 1970s. The recurring visual image of Sacco and Vanzetti’s comrade Andrea Salsedo falling to his death from a window was eerily similar to the image of Giuseppe Pinelli, an Italian anarchist who similarly fell — or was pushed — in 1969 while in the custody of Italian police. The sense of possibility mixed with dread, of liberation movements in collision with state repression, suggested to me that SACCO & VANZETTI may have been less about historical events in the 1920s than the volatile times in which it was filmed.

When Amy and I were able to go to Italy to shoot for our documentary, we arranged to interview Montaldo in his Rome apartment, and with his gracious permission, we edited scenes from his film into ours. We came to realize that Montaldo’s feature film was part of a long tradition of creative people engaging with the story of Sacco and Vanzetti. In addition to the historians and eyewitnesses that we interviewed, we filmed with other artists who, like Montaldo, were moved to retell the story in their work. Composer and conductor Anton Coppola described moments from his opera about Sacco and Vanzetti as if he were watching the history in real life. Painter Edward Giobbi showed us his giant, vibrant canvases inspired by the tragedy. Arlo Guthrie sang one of his father’s Sacco and Vanzetti ballads. Art historians told us about Ben Shahn’s series of works made about the case — over thirty images completed over many decades. Many other artists — Diego Rivera, Edna St. Vincent Millay, George Grosz, and more — were drawn to the story.

Perhaps the most powerful works about Sacco and Vanzetti were created by the protagonists themselves. During seven years in prison, Nicola Sacco and Bartolomeo Vanzetti wrote letters, journal entries, and eloquent prose about their lives, which were published in a book as moving as anything I’ve ever read in English, though written by two men who entered prison with only minimal skills in their new language. As Montaldo related in his interview, “Within the four walls of a prison you can find very lofty ideas. Prison is a terrible university.” Tony Shalhoub and John Turturro agreed to read Sacco and Vanzetti’s words in our film.

SACCO AND VANZETTI was my second film as a director. My first, also a collaboration with Amy Linton, was THE INTERNATIONALE, a short documentary about the long, complex journey of a radical song. As I think about it, like SACCO AND VANZETTI, it’s a story about the intersection of creative expression and social change. The anthem of socialism and communism, “The Internationale” has been sung in nearly every language on the planet. Since its origins during the Paris Commune of 1871, it was a song of hope that celebrated the possibility of working people determining their own future.

My first, urgent task in starting work on the film was to shoot an interview with the legendary folk singer, Pete Seeger. An accepted rule of documentary making is to film older people sooner rather than later, and back in 1993 I was concerned that Pete wouldn’t be with us much longer. So we hurried up the Hudson River to his home in the woods to film him talking about, and singing, the song. When we arrived, I told Pete that I adored “The Internationale” and thought of it as an undiluted musical expression of a worthy ideal. In his own, gentle way, he schooled me. While fingerpicking on his 12-string guitar, Pete delivered an hour of eloquent rumination about the curious career of the song. Yes, it can be stirring, he told us, but it also became an anthem of oppression, kidnapped by the Soviet Union and turned into the theme song of a brutal dictatorship. My mind was opened, the story became more complex, and we had the beginnings of a movie. And it turned out that I didn’t need to have hurried to film him — Pete stuck around until 2014.

Without a budget, and with two small children and a full-time job, I made THE INTERNATIONALE in the corners of my time, and I think that the seven years it took to complete it made for a much better movie. This was my last documentary made before the internet and the research was fully analog. For years, friends would call with new discoveries: an archival clip I hadn’t seen, a cassette tape of a reggae version, a woman from the Philippines whose father sang it to her as a child, a student from Tiananmen Square who sang “The Internationale” in Mandarin to protest the communist regime. The Chinese students inspired the British folk-punk bard Billy Bragg to rewrite “The Internationale” with fresh lyrics, and I filmed Billy singing his new version when he was on tour in the US.

The process of making the film was appropriately socialist. Colleagues volunteered to shoot for the project when they were overseas; one interviewee even filmed himself and mailed us the tape; sympathetic filmmakers loaned gear and talent; and everyone in the film got to sing a line of the song in a montage that Amy miraculously made musical.

My great producing breakthrough was when a lifelong activist who ran one of Atlanta’s top video facilities invited me to finish my film there for free. Making a documentary about a socialist song was a fundraising challenge, so I jumped at the chance. It was there that I was introduced to Amy, an Atlanta-based film editor who had recently cut DAUGHTERS OF THE DUST. Amy has a beautiful touch with music and storytelling and we crafted a thirty-minute film in which something like twenty-seven minutes were scored with the same song (albeit in dozens of renditions). THE INTERNATIONALE found its way onto PBS, won awards, and has traveled the world. When we screened it at film festivals, we handed out lyrics in many languages, usually on pink paper, and led singalongs, complete with a raised fist during the chorus. Amy and I have gone on to make many more films together, whenever possible about music and making a better world.

When we finished THE INTERNATIONALE, not long after the collapse of the Soviet Union, socialism was in retreat. Now it’s on its way back. My hope is that when the workers of the world finally unite, they do it with a great deal of singing.

Peter Miller is an Emmy and Peabody-winning winning filmmaker whose documentaries include AKA DOC POMUS, SACCO AND VANZETTI, A CLASS APART, THE INTERNATIONALE, JEWS AND BASEBALL, EGG CREAM, and the duPont-Columbia Award-winning BEDLAM. The Los Angeles Beat describes Peter’s films as “one of the preeminent bodies of work in current documentary cinema.” He has also been a producer on many of Ken Burns and Lynn Novick’s documentary series for PBS. To learn more about Peter Miller and Amy Linton’s films, visit their website.