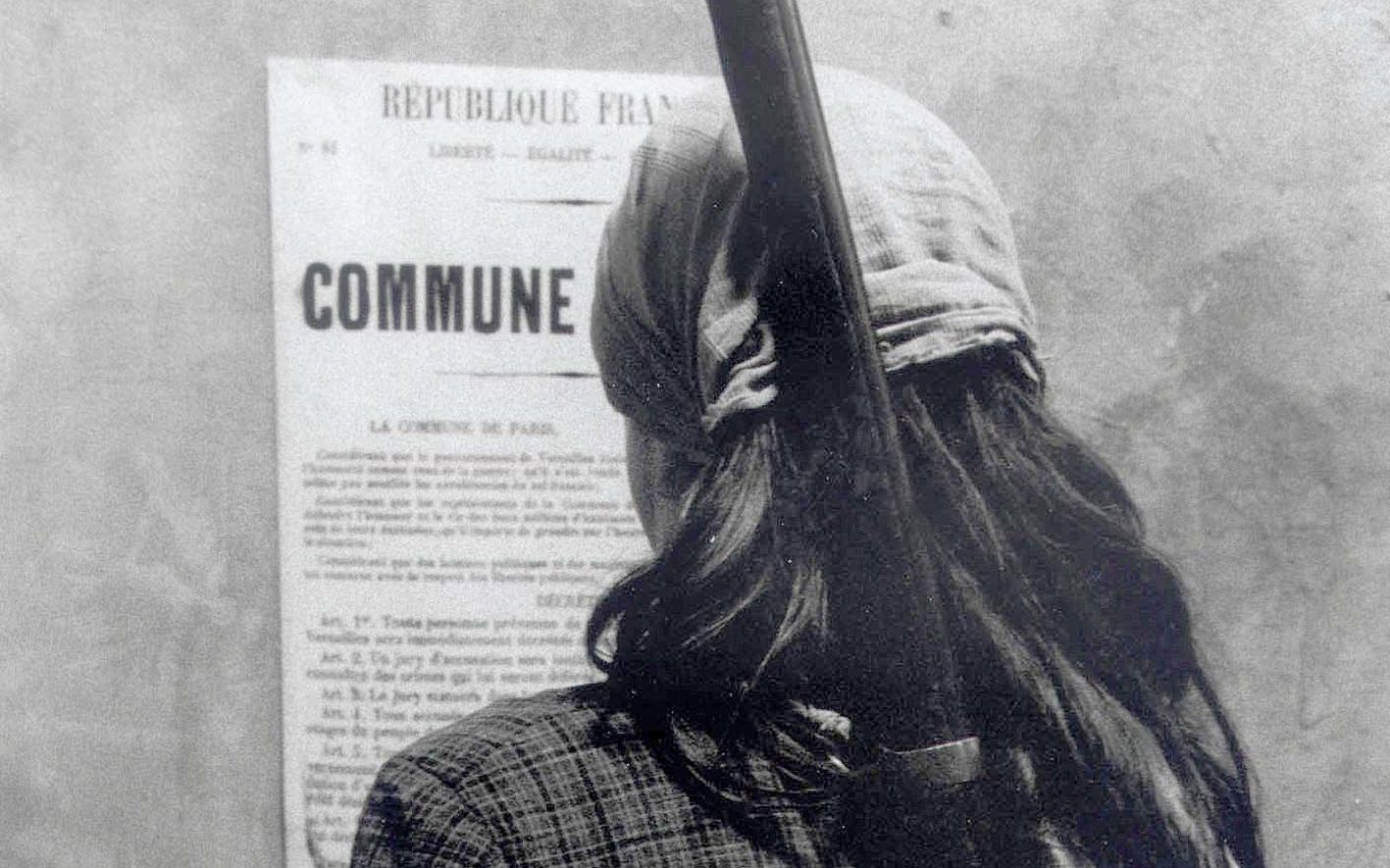 OVID, the curated streaming destination for documentary and art-house films, announces its wide-ranging selection of 34 films coming in April. Many of the films are premieres and available only on OVID.tv. Among them, marking the 150th anniversary of the event is Peter Watkin’s monumental epic La Commune (Paris, 1871), never before available on any streaming platform.

New members can start their free 14-day trial at OVID.tv

A cinematic mosaic depicting Pope Francis’ 2018 visit to Chile, God explores the constant tension between the social creation of God in different communities and the tensions that define modern-day Chilean society.

“A bold, blunt, yet clinically intelligent film … it’s all at once a gripping thriller, an incendiary social critique and a mordant moral fable.” —The Playlist

Follow award-winning public garden designer Lynden B. Miller as she sets off to explore the remarkable life and career of America’s first female landscape architect, Beatrix Farrand. Farrand was responsible for some of the most celebrated gardens in the United States and helped create a distinctive American voice in landscape architecture.

A witty and sparkling comedy about a housebound ‘trophy housewife’ (Catherine Deneuve) who steps in to manage the umbrella factory run by her tyrannical husband. To everyone’s surprise, she proves herself a competent and assertive woman of action. Gerard Depardieu plays a union leader and her ex-beau who still holds a flame for her.

Claire is a tightly wound midwife who forms an unlikely friendship with Béatrice, her late father’s free-spirited mistress. Though polar opposites, the two women come to rely on each other after Béatrice reveals that she has brain cancer.

“Fascinating! A humanizing portrait of a sex-positive feminist before the classification even existed.” —Flixist

Explore the business, fandom, and community of comic book stores across the United States.

“Not only an incisive look at a small, threatened slice of Americana, but a warm and funny portrait of the people who make it worth caring about.” —Cine-Journal

Based on a thorough historical research into the Paris Commune of 1871, this film leads to an inevitable reflection about the present. This year marks the 150th anniversary of the Commune.

“Mesmerizing… A dialogue between past and present, with each time frame used to shape and define the other.” —Jonathan Rosenbaum, The Chicago Reader

A look at Peter Watkins and his uncompromising devotion to his ideals, plus a look into the making of La Commune.

The story of four brilliant and engaging men— Irving Howe, Daniel Bell, Nathan Glazer and Irving Kristol—caught up in the central struggles of our time. This enthralling film creates a vivid picture of intellectual life in the 20th century.

Investigates the parallels between the personal life and the life work of arguably the most important philosopher of the 20th Century, Jacques Derrida.

“Many of the leading scholars and translators of Derrida’s work were collaborators on the film, and it shows.” —French Review

Assembled from over 10 years of footage, Markie in Milwaukee tells the story of a midwestern transgender woman as she struggles with the prospect of de-transitioning under the pressures of her fundamentalist church, family and community.

“Immersive, surprising and heartbreaking. Impresses with its artfulness and insight as it captures the tormented soul of its subject.” —Peter Keough, The Boston Globe

Explores the history of the British punk band The Mekons from their creation in 1977 to the present moment Among the celebrated fans who appear on screen to testify to the power of their music and artistic innovations are authors Jonathan Franzen (The Corrections) and Luc Sante (Low Life), musician/actor Will Oldham, film director Mary Harron (I Shot Andy Warhol), comedian/ musician Fred Armisen (Portlandia), and critic Greil Marcus (Mystery Train).

“The Mekons are the most revolutionary group in the history of rock ’n’ roll.” —Lester Bangs, legendary music critic

A man gets a new job in a supermarket and falls in love with his married co-worker.

“Poignant and richly sympathetic!” —The Guardian

“It will break your heart—a few times—but it will definitely leave a smile on your face.” —ScreenAnarchy

In an attempt to flee Nazi-occupied France, a man assumes the identity of a dead author but soon finds himself stuck in Marseilles, where he falls in love with Maria, a young woman searching for her missing husband.

“Like a remake of “Casablanca” as written by Kafka.” —IndieWire

The life of the beloved singer Chavela Vargas, who gains worldwide fame for her beauty and charm and her interpretation of traditional Mexican ranchera.

“A wonderful tribute to a queer icon.” —San Francisco Chronicle

“Donald Trump’s ultimate nightmare – a Mexican lesbian diva who can wring your very soul.” —The Guardian

Flashbacks reveal the destructive love affair between the wife (Rachel Weisz) of a British judge and a rakish RAF pilot (Tom Hiddleston).

The inspiring story of a small group of Pulitzer Prize-winning journalists – David Halberstam, Neil Sheehan, Malcolm Browne, Peter Arnett, and the great photojournalist Horst Faas – who fought to report a truth that was vastly different from the rosy version put forth by the White House during the early years of the Vietnam War even as their own government sought to discredit them.

“The film captures a swirl of personalities and conveys the excitement of reporting in a fast-moving and dangerous atmosphere.” —The New York Times

“One of the best anti-Vietnam films made by underground filmmakers.” —New York Magazine

A visually stunning chronicle of what it is like to live in Antarctica for a full year, including winters isolated from the rest of the world, and enduring months of darkness in the coldest place on Earth.

A rebellious video artist rejects her father’s desire to have his children keep and maintain the family farm in rural Basque country and moves to the city to pursue her passion.

“If you want to be thoughtfully melancholy for a couple of hours in the presence of images of striking beauty, watch Amama.” —The Hollywood Reporter

A mysterious and wealthy woman hires a lonely nurse named Clara to be the nanny of her soon-to-be born child. When a full moon brings about the birth of a werewolf, Clara makes it her mission to care for the monstrosity and protect it from others.

“An ambitious work not only in scope but design, influenced by Jacques Tourneur’s psychological horror noirs.” —Variety

Over a trio of summers, a caretaker for luxury condominiums (Regina Casé) relies on her resourcefulness and her eye for opportunity to take advantage of whatever comes her way in this humorous and inventive episodic feature.

It’s love at first sight when bridesmaid Senta falls into the life handsome young Philippe at the wedding of his younger sister. Though their passion for each other is as obvious as it is unquestionable, Philippe soon discovers that Senta’s life is shrouded in mystery and her stories surrounding her past anything but believable. When one day she asks Philippe for a terrible proof of his love, Philippe must come to terms with who his lover might really be.

Tensions arise after an actress (Nicole Garcia), a director (Bernard Giraudeau) and others gather to watch a young woman’s short film.

“One of the steamiest sexual encounters in film.” —Chicago Tribune

Portrait of Haida artist, Robert Davidson, whose art and activism point the way towards a renewed connection with the natural world, perhaps saving us from ourselves.

“Leaves you inclined to believe Davidson when he surmises that art may just possess the power to save us from ourselves.” —Vancouver International Film Festival

Follows the Radical Monarchs, a group of young girls of color on the frontlines of social justice.

“The girls build the vision and the fortitude needed to organize, through their joyous first experiences of comradeship, all of which facilitated by the program’s nurturing environment.” —SF Weekly

In this deeply moving, award-winning French documentary, a family reflects on the murder of their 29-year-old son and tries to move beyond feelings of hatred and revenge. Filmed in classic verité style, this story of one family’s courage after terrible loss is “powerful, simply but boldly constructed” and “loaded with tension.” –BBC

Margherita, a well-known director working on her latest film, suffers an existential crisis when she has to come to terms with her mother’s terminal illness and re-evaluate everything she thought she knew about life.

“Beautifully observed and delicately balanced…this is Moretti at his interpersonal best; intimate, empathetic and intensely humane.” —The Guardian

Nannerl Mozart, Wolfgang’s older sister, was a musical prodigy until her brother’s talent overshadowed her own abilities as a composer and harpsichordist.

“Lively and Fascinating… A treat for classical music lovers and cinephiles alike.” —Variety

A French bank employee finds herself stuck in betw

New today on OVID: WHEN MEMORY COMES: A FILM ABOUT

Documentary THE SEER & THE UNSEEN is a magic reali

Announcing the second installment of our series "A

September marks a new milestone for OVID! We are r

"At once heartfelt, gritty, and informative" (Vill

Sita is a goddess separated from her beloved Lord

Films are not disposable commodities and should ne