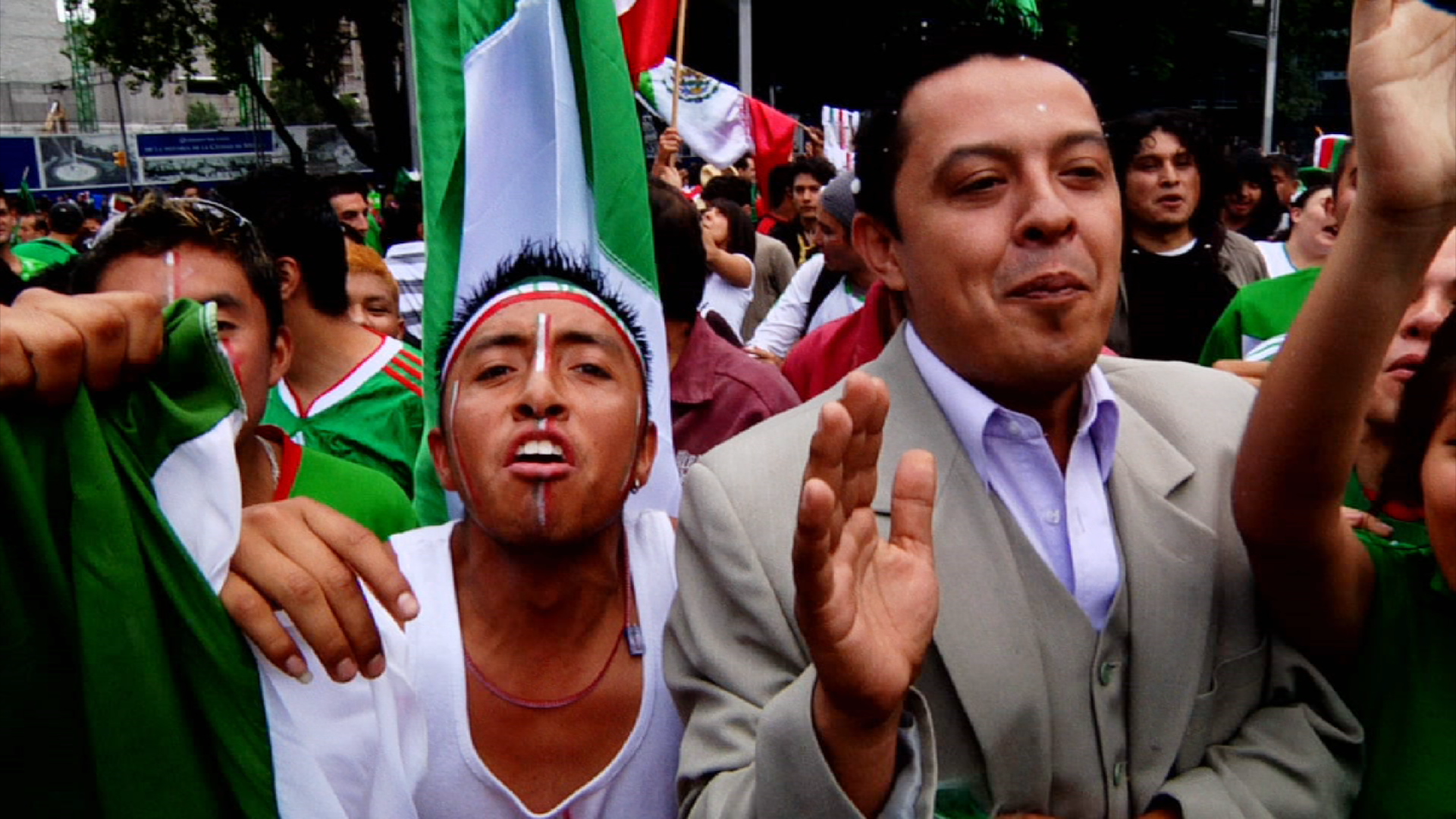 “Eugenio Polgovsky’s films are lyrical threnodies, choreographies in the face of crippling neo-colonialism. They refuse to let the invisible stay invisible. Once seen they can never be unseen.”

The work of Eugenio Polgovsky, the Mexican director who died at the age of 40 in 2017, conjures the savage tides and indifference of history, revealing how long-established communities can be ripped apart and reduced to collateral damage in the name of brute ideology. At an early age Eugenio won a major Unesco prize for his photograph of gypsy musicians who had been made refugees by the war in Yugoslavia – he had started out as a photographer under the inspiration of Henri Cartier-Bresson. He turned to filmmaking in part because no professional school for photography existed in Mexico. Even after Tropic of Cancer, the 2004 medium-length feature he produced for his BA thesis at the Centro de Capacitación Cinematográfica in Mexico City, drew the attention of programmers and curators around the world, it failed to get a release in his own country. That failure inspired Gael García Bernal and Diego Luna to set up Ambulante, a documentary festival that screens nonfiction films in cities and towns outside the capital and organises filmmaking workshops in rural areas.

Polgovsky went on to make three more features, but until the ICA’s retrospective this month there have been few opportunities to see them as a body of work. Tropic of Cancer, which has lost none of its power to startle and disturb, follows a family as they draw on race memories of hunter-gathering to subsist in the Mexican desert. They climb trees, clamber through barbed wire to yank cacti from the parched earth, capture and skin snakes, aim slingshots at birds, trap chinchillas and turn them into stew. This could be an ethnography of abjection, about desperate survivalism, about the wretched of the earth. Some critics have been tempted to assert the shared entrapment of animals and humans.

It’s hard not to be fascinated by the meeting of social worlds in scenes in which family members sell their wares to urbanites who pause by the side of motorways. Here is the modern world structured around speed: the foot-bound meeting the automobile classes; those whose relationship to things is through muscle and touch versus those who most likely work at screens; those who live according to the slow rhythms of nature versus those who inhabit air-conditioned offices and buy things with cards in 24/7 cities. The former are culturally invisible and inaudible; the latter – Polgovsky suggests through repeated sequences of cars and lorries rattling down the freeway – have dominion.

Yet the film is alive to the artfulness the desert-dwellers display across their sun-blasted landscapes. They have keen ears, are skilled in their handiwork, and have the poise of ballet dancers or tight-rope walkers. Similarly, The Inheritors (2008) tracks child workers, some as young as four or five, as they move across the Mexican countryside – up muddy hill-tracks, through rutted fields, sometimes with holes in their shoes. How difficult it is to even stand straight, as juddering trucks take them to the fields where they will spend days filling boxes with tomatoes and chilli peppers. They scythe cane, get knee-deep in cement on building sites, search for firewood. They also sing, mock each other, do somersaults in the grass. Toddlers are laid by the sides of the fields on which their parents toil and tractors pass by.

Polgovsky captures the rhythm and rituals in the children’s lives, the delicate acts of choreography they perform, the beauty of clouds and mist in the mornings. He’s attentive to hands as much as to feet – of the girls who work at looms, of mothers kneading tortillas, of an old woman gripping a stick to stop herself from falling. He returns repeatedly to a boy hacking away at a chunk of wood, peeling its bark, making delicate incisions with a small knife; when, not infrequently, he cuts himself, he wipes his fingers on his jeans or bandages them with Sellotape. The carved and painted bird he will later sell is handsome. It is art soaked in blood.

Mitote (2012) is the outlier in Polgovsky’s filmography. Shot at El Zócalo, a huge square in Mexico City often used for political rallies, it’s a raucous, deliberately disorientating essay about the existence and possibilities for social surrealism. The first shot – a close-up of a crack in paving – is held so long it’s hard not to think of the situationist slogan used by French protesters in May 1968, “Sous les pavés, la plage!” (“Under the paving stones, there is a beach!”). The whole film recalls The Fall (1969), Peter Whitehead’s collagistic portrait of New York on the brink of revolution. It simmers with tension, highlighting maverick characters who see the present-day nation as a façade and serve as a loudhailer for spectral voices.

El Zócalo is a livid heterotopia. Tourists rub up against wrestlers, protesters, hunger strikers, tribal dancers, hawkers, street entertainers, prowling security officers, kids dressed up in traditional garb to watch digital presentations of international football matches. Polgovsky is drawn to a particularly angry older man who paces around in circles, heaping scorn not only on politicians but on his fellow Mexicans for their quietism. He and a riddling shaman are heard spitting out the kinds of sentiments that were perhaps implicit in the earlier films: “We haven’t been worthy of being called Mexicans for 200 years!” “Television is doping you.” “If we want to stop this poverty we must awaken!”

At the end of the film, images are presented upside down – as if to evoke the idea of a carnival, a world experiencing dramatic upheaval. The sound design becomes abstract – bells pealing, loud rock music, gongs, sudden silence. Even brand names and advertising slogans – ‘FIFA Fun Fest’, ‘3D World’ – begin to seem strange. Most arresting are many shots and sequences showing images of ancestral masks –  mysterious, beautiful, sometimes disturbing. The square pre-dates colonialism: Polgovsky projects indigenousness not just as a political cause – the stuff of slogans and soapboxes – but as a submerged force that has the potential to reappear and destabilise modern life.

Resurrección (2016), Polgovsky’s final film, is an unforgiving look at the toxic lives of residents in El Salto, one of the poorest areas in the Mexican state of Jalisco. Here is a waterfall so magnificent it was known as ‘Mexico’s Niagara’. Its beauty and surrounding verdancy used to be a magnet for filmmakers and tourists. Flickering images from their movies haunt this one. Now the locals live an agonised afterlife. The factories that located to the region in the 1970s and 80s release nearly 1,200 pollutants into the water, according to scientists. They also create jobs, developing dormitory towns full of what locals dismiss as ‘Auschwitz houses’; here employees are expected to grind away for 12 hours each day.

Resurrección is rich in poetry. Locals describe water as “our daily bread”. Birds en route to other countries used to flock there – “It sounded like a steam engine of ducks.” Residents, says one woman, “ate river, they played and dreamt river”. Says another: “We haven’t just lost the river; they’ve taken our energy, our desires, our times, our curiosity and our creativity.” Yet it’s the space between their words, the look in their eyes as they speak – reverie, fury, hopelessness – that is hard to forget.

The inventory of human suffering is chastening. So is the persistence of the El Salto residents. Not just those actively fighting the polluters – one young woman takes outsiders on ‘horror tours’ of the ecological vandalism – but others, young and old, who tell jokes, fall in love, tend to their families. It’s heartbreaking to see a young girl severely afflicted by skin disease. Polgovsky, with characteristic tact, doesn’t dwell on her illness. But how can we unsee what we have seen? Through the course of the film, sound is drained, the echoes of human voices almost louder than their messages. Images degrade and colours bleed into each other. Wherever we are, it is far beyond any traditions of reportage.

One image in Resurrección, at once morbid and playful, I cannot forget: what used to be water, churned up into scummy froth, pufflets of which float up above a river. A local man, standing by its banks, covers his mouth and turns away. It makes the same call as Italian social theorist Franco Berardi in his recently published Breathing: Chaos and Poetry: for “a liberation of the social body from the abstract domination of financial absolutism, from the abstract grip that is suffocating social respiration just like airborne pollutants are spreading asthma and cancer to the lungs of the next generation.” Eugenio Polgovsky’s films are lyrical threnodies, choreographies in the face of crippling neo-colonialism. They refuse to let the invisible stay invisible. Once seen they can never be unseen.