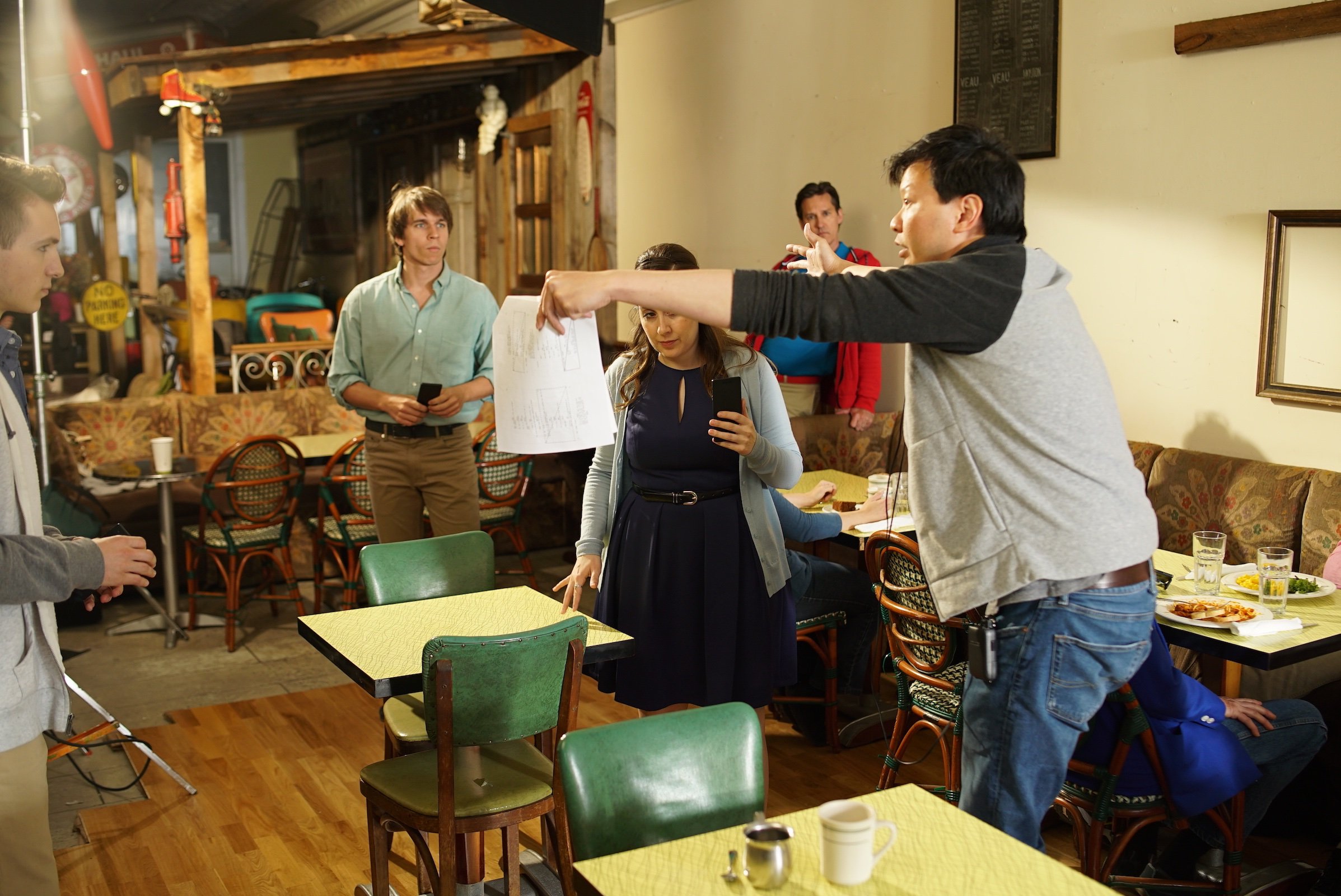 On the Hidden Beauty of Art: An Interview with Patrick Wang

An interview between Priscilla Posada and filmmaker Patrick Wang.

Art has a place in our lives: It can be a really wonderful tool to take care of each other.

Patrick Wang is a filmmaker living in New York. His latest feature A Bread Factory explores the role of art in everyday life and has been hailed as “a major new work by a singular American artist” (New York Times).

Priscilla Posada: How would you describe A Bread Factory to someone who hasn’t seen it yet?

Patrick Wang: It’s hard to describe because I get excited by many aspects of it. The film takes place at a community art center called the Bread Factory. It’s the story of the people who move through there, the challenges they face, what it takes to keep a place like that going, and what kind of value it provides to the people involved.

The broader version is that it’s a great place to think about community, art and commerce, and the struggle to create a non-commercial space in our lives. A place where we can tend to our souls and take care of each other according to values that don’t have dollar signs next to them. It’s not hard to understand, but it’s very hard to exercise and protect.

You’ve mentioned the influence of Ingmar Bergman’s Scenes from a Marriage and Fanny and Alexander. You’ve translated poetry by Nobel laureate Ivan Bunin. And the Greek play Hecuba is a connecting thread through A Bread Factory. How have works in translation influenced your own artistic vision?

Words are very powerful. But Arthur Miller was asked, “Why do you write all these words?” and he replied, “You write all those words to lead up to those moments that you can’t express in words.”

Tsvetaeva said that poetry itself is trying to translate a feeling. Poetry doesn’t live in the words, it lives in that feeling. You’re trying to recreate that feeling with the words. Maybe doing things that throw us out of the words or forms we know helps throw us into inexpressible, wilder emotional terrain.

In A Bread Factory, one character calls theater “therapy for the poor” and you’ve mentioned your experience in Argentina as a teen living with an artist opened the idea to you that art is for everyone.

When I was a teenager, I was an exchange student in Argentina in this wonderful town Goya. My host mother was this extraordinary woman. She taught in the schools and was ostensibly an art history teacher. But she was also a local politician. She was a sculptor, a writer, a poet and she directed plays. In fact, she put me in my first play. It was never discussed, it was just: “Of course, you’re going to participate.”

It’s extraordinary when something that seems so far away—someone instinctually just assumes that it’s not. I saw how perspective can change how accessible worlds are to you. It wasn’t to turn me into an actor. It wasn’t for a practical purpose. It was just because that’s a thing we can do together. Because it’s fun, you discover things about yourself.

The whole house was like that. There were always musicians and poets coming through; it was dynamic and really alive. There were so many different lessons to learn from that. But, being a little slow—as I usually am in life—I was exposed to it, but I didn’t learn the lesson fully. Or maybe that’s just something that young people do: 10 years later, we learn the lesson that our mentors were trying to teach us.

When I was in college, I gave myself permission to explore the arts. I started volunteering for local theater companies and learning how to build a set, how to sew costumes, how to hook up the lights. That was a very foundational time in my life. I was at MIT and one of the wonderful things about the school is that they understood that the sciences need art, and the arts need some regimentation and form. While we think people have left and right brains, most people have a whole brain [laughs].

Even if people favor one or the other, it’s very sad to deny yourself the exercise of the rest of you. The big lesson is that exercising the rest of you can save you. It can bring a kind of balance and wisdom to your life.

In the film, the actor-citizens perform to an almost empty theater. Can you talk more about this in relation to our current moment?

In A Bread Factory, I didn’t want to just wave the banner of art as this great thing. Art has a place in our lives, it can be a really wonderful tool to take care of each other. There’s a big moment in A Bread Factory where they’re talking about the importance of art, but the movie doesn’t end there.

Part I of the film ends with a heartbroken kid. He doesn’t know how to express what’s going on in his life and what he’s feeling. Yet this theater director puts this monologue in his hands and knows that it’ll activate something. It puts words in his mouth, it makes him become someone else. It helps him express himself. I think that’s the beauty of art. We don’t have to see him become a great actor. The point can be in these quiet and hidden ways. The world doesn’t give us feedback as to its great importance, but we feel it in our lives.

One can watch A Bread Factory on OVID. As the streaming landscape becomes more consolidated, what do you see as the role of smaller independent streaming services?

If you look at the beginning, one way streaming services made a case for themselves is that they actually had more diversity than your local Blockbuster. You could get all these different titles that you couldn’t get there. It’s interesting how they built that identity, and have since strayed so far from it.

There’s a proliferation of streaming services, but not much diversity in their values. I think that’s what’s key: you need a space where there can be a different expression of value. But anytime that value is more spiritual, it faces more commercial tests of endurance and viability.

You should exercise your own creativity in many different spaces, but equally important is the permission to do that discovery as an audience member.

Because of that, they’re more vulnerable. So we have, at times in our history, these abnormalities where something like that can thrive by accident. And it can be wonderful. I hope that there are wonderful accidents that let some of these services not just express their values but push them even further. If you think about it, smaller streaming services definitely push further than mainstream services do.

I remember talking to a journalist once and we both regretted being in an age where not only do you have to be a great filmmaker, but you have to be a great promoter of your own work. How sad. What about the people who are just great filmmakers, but they don’t know how to promote themselves either to festivals, or just in the public sphere? We lose so much by not giving them a path into our consciousness and into the arts conversation.

You should exercise your own creativity in many different spaces, but equally important is the permission to do that discovery as an audience member.

#SmallBusinessSaturday | Support independent film! ▶️🎁💙 For a limited time, use promo code CINEMA and give the gift of OVID at 50% off! Must use link 🔗 http://misc.ovid.tv/gift.html